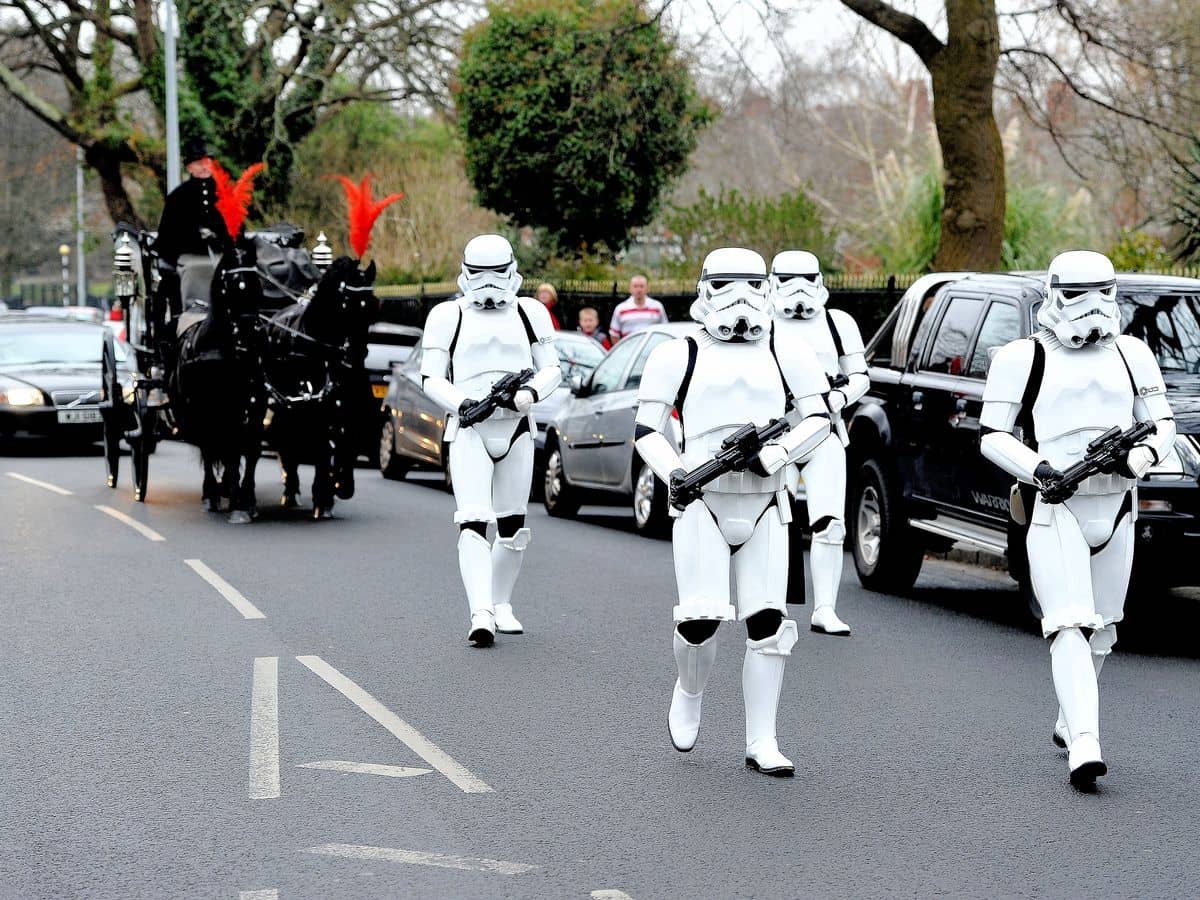 Depending on your religious beliefs, the funeral ceremony can take many different formats.

There are no legal requirements for the form a funeral/memorial ceremony must take, and so once the death certificate and registration have taken place, it’s up to you to decide how to mark the committal and where.

The majority of people in the UK still use a religious minister to conduct the funeral at the crematorium or burial ground, but increasingly so, secular/civil celebrants or even family members are leading the way to some very personal and fitting farewells.

The slightly awkward question of what to do with your body when it’s no longer needed by you, usually leads people down the traditional route – church/cemetery burial, or cremation, via the local undertakers.

You may have lived a splendid life and are thinking of what will happen after you bid the world goodbye. Burial and cremation are the most popular ways in which the bodies of the dead are disposed of. However, there are some non-religious alternatives to burial and cremation which are still splendid ideas.

A humanist funeral is a non-religious service, usually held at a crematorium, but again, it can be anywhere, especially if you have opted for something like a direct cremation above. There are usually non-religious songs and readings by family and friends and the service is taken by a humanist celebrant,

The British Humanist Association offers completely secular ceremonies conducted by their humanist officiants. A Humanist ceremony is increasingly common and is one with no religious content at all. It can be more appropriate for those who neither lived according to religious principles nor accepted religious views of life or death.

A Humanist Funeral or memorial ceremony recognises no ‘after-life’, but instead uniquely and affectionately celebrates the life of the person who has died. Proper tribute is paid to them, to the life they lived, the connections they made and have left behind, and as with “traditional” funerals, friends, relatives and acquaintances can express their feelings and share their memories.

What is a Non Religion Funeral Called?

Most commonly a non religious funeral is called a celebration of life or a humanist funeral.

Who Conducts A Non Religious Funeral?

Anyone can conduct a non religious funeral. Family members and friends make excellent officiants but you can also hire professional non religious celebrants

What Do You Wear To A Non Religious Funeral?

You can wear anything you want to a non religious funeral. The deceased may have left instructions on what to wear or the family arranging the celebration may pass on some ideas.

Can You Have A Non Religious Funeral In A Church?

You can hold a non religious funeral anywhere you wish but you may need to speak to the church beforehand to ensure they are happy.

Having A Party Instead Of A Funeral

If you don’t have a traditional funeral or cremation, then what can you do? How about getting friends and family together at a meaningful location or just somewhere local and having a celebration of life, a proper knees up, mourning not included!
This is ever common and a popular idea, especially with the rise of direct cremation. Families are saving money on the actual funeral ceremony and deciding instead to spend on a more appropriate party. You are in control of how you celebrate. See our range of funeral ideas for more on this!

What is a Secular Funeral

A growing number of people are finding that a non-religious / secular ceremony is an appropriate choice for them to make. These ceremonies are still conducted by professionally trained “celebrants”, but focus purely on the celebration of the life of the person concerned. They can still include a favourite hymn and/or prayer if desired (Civil), or no religious content at all (Humanist).

A cheaper alternative to a traditional cremation is a direct cremation. The growing trend is basically a cremation without a service.

The body is collected by a dedicated company (or funeral director) and cremated at a specific time to suit them. this means that the cost can be kept low.

The remains are then delivered back to you and you are free to plan a separate celebration that doesn’t include all of the regular church/crematorium business – you are free to di t when and where you like.

Not as common (yet) but if the thought of traditional cremation does not please you then resomation may be an option for you. Bio cremation is an eco-friendly option because alkali and water-based solutions are used in decomposing the body. This is done while under high pressure, breaking down the body to liquid and bone ash. This liquid can then be recycled. It can be poured onto a garden or natural spaces. The bone ash can be put in an urn.

A more common practice is to get rid of the dark colours and to add a theme to the funeral. This could include requesting everyone to wear a certain colour, suggesting a theme (like a football team) or even fancy dress, if your relative was that way inclined. This can help to change the funeral of a feeling of mourning to more of a party and celebration – I for one would much prefer this for my funeral.

There are a growing number of sites that accommodate a woodland burial. This is where the body is buried amongst a woodland, in nature. Again, this can be non-religious or religious and the locations typically have a room where family and friends can gather. Read more on woodland burials in our guide.

There are a many alternatives to burial, most very practical, some slightly bizarre – but all potentially possible if that’s what you want.

For many years, it has been the norm to have the resting place of the dead being ‘6 feet under’. However, burials are slowly being ditched for alternative ways of conducting funerals. In some cultures, cremation has been practised and it ha caught up with many more people across the world.

Yes, it is actually possible to be buried in your garden for all eternity. This can be conducted by someone of your choice or simply part of a DIY funeral.
Read our guide to get all the facts and laws required to be buried at home.

Some call body donation giving your body to science. Thanks to body donation, there came about developments in the medical field since medical experiments were done on cadavers. Organ donation is possible because after a person dies, some of the body parts can remain healthy and can be transplanted to recipients. It is ironic that it would take losing one life to save another one in such cases.

The land is not the only place where bodies of the dead may be disposed of. The sea is a chosen place of final rest for many who love the sea, sailors especially. Sea burials aka being buried at sea are also not costly because the body is wrapped up in cloth then tossed into the sea.

Alternatively, just do it yourself. Naturaldeath.org.uk is a wonderful charity full of advice on what you need to do if this is the path you choose. Or if you can follow this link if you would like to see a recent video diary from a lady called Wendii Miller, covering the DIY burial of her mother.

With so many religions practicing in the UK, from Christians, Muslims, Sikhs, Buddhists and so many more, it is usually easy for a funeral director to find the most appropriate faith leader and arrange the funeral with them. Make sure you tell the funeral director of any specific needs as not everyone is familiar with all the different denominations and variations of practice within the different faiths.

Most ministers will be familiar with issues of time and the practicalities of the funeral, but the funeral director will guide them as well as you about these matters.

If you are having hymns or religious readings, you can ask to see the actual text that will be spoken as there may be different translations/versions. Many hymns can be sung to different tunes, but the funeral director or minister of religion will be able to advise you. Many ministers will agree to incorporate a personal element into a funeral, such as recorded music or a non-religious reading. A period of silence as well as formal prayers may also be appropriate.

You Are In Control

In the end, there is no hard and fast rule as to what a funeral should look like. This website exists to show everyone that they have choices and a funeral really is a final chance to say goodbye in the most appropriate way to you possible. Who cares what others think!

In the face of death, you might be overwhelmed into taking the traditional/easy option, but if the deceased hasn’t left a final funeral wishes plan anyway, take a moment to think about what they would truly want.

Luckily, you will have options since there are a huge number of alternatives to burial & cremation and more people are now open-minded.

Embracing these methods and respecting the wishes of the dead should be the norm. Choosing an alternative funeral option is now more accepted. Embrace how different we all are and explore every option, you won’t regret it!